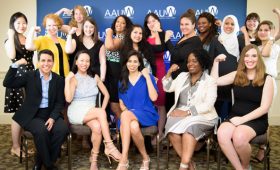 Growing up as an Asian-American daughter of immigrants in the Midwest, Kelly Tsai told college women, “There was not a place for me where I made sense. … Make some noise if you can relate.” The room erupted. Tsai, a spoken-word poet and one of five, 2016, Women-of-Distinction awardees at the National Conference for College Women Student Leaders (NCCWSL), echoed the theme of otherness. Tsai expressed her admiration for the young leaders in the audience and challenged them to pursue their dreams without fear. “Confidence is a muscle. You must use it every day. Sexism and sexual harassment are real, but know that other people’s mistreatment of you is not who you are!”

Superior Court of the District of Columbia judge and advocate for LGBT and Latino people’s rights, Marisa Demeo, remembered being asked her whole life to account for where she “came from.” She was born in the United States, but people questioned her Puerto Rican and Italian background. They wanted to place her race, heritage, and culture into a single box. As a gender-nonconforming person, she further baffled standard constructions of identity. To those who have felt ostracized, Demeo declared, “You are a vital thread in the fabric of America. Without you, America would be less beautiful. Less creative. Less smart. And less strong.” She cautioned the college leaders not to hide their true selves out of fear. “When you reject yourself, that is the deepest pain there is.”

A campaign-and-communications manager at the Center for American Progress, Sarah McBride, brought the crowd to tears, cheers, and murmurs of empathy with her story of revealing her identity as a transgender woman and then losing the partner who had helped her get there. Just four days after she married another transgender activist, he passed away from cancer. His death, painful as it was, reinvigorated McBride’s passion for trans-rights, underscoring her belief that “change cannot come fast enough, that everyday matters when it comes to building a world where every person can live their life to the fullest.” McBride encouraged the crowd to nurture a sense of urgency, as students can be powerful change makers. “Our college campuses should look like what we want our country to look like in 10 or 15 years!”

Business investor, Anu Duggal’s, advice was pragmatic as she offered tips on how women can build professional networks. She advised students to track names of professors and bosses in a spreadsheet and make an annual effort to stay in touch through letters or coffee trips. “Find a mentor. Whatever field you go into, it’s incredibly important to find people who will support you and be your advocates.”

Entrepreneur Kimberly Bryant encouraged attendees to look inward for inspiration and to rely on each other to achieve goals. Bryant grew her organization, Black Girls Code, from a dozen girls meeting in a San Francisco computer-lab basement to a worldwide organization serving more than 6,000 girls. Inspired by her STEM-enthusiast daughter, Bryant encouraged the audience to make passion drive their careers. “The thing that gets you up in the morning … do that,” she advised. She urged the women leaders in the room to rely on each other’s strength. “You have the potential to answer all of the questions that you may have on what will make the world a better place. But we need each other.”