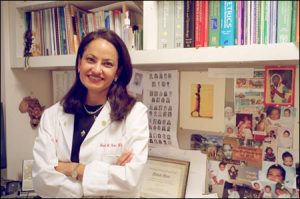 Do you know what FGC stands for? Not likely.

Do you know which significant woman has just been inducted into the Arab- American National Museum here in Dearborn, Michigan?

She has devoted her life to stopping the suffering of women who have endured FGC. In fact, her greater goal is to eradicate the practice altogether because of its medical complications and legal issues.

“It’s still shocking to me. I saw an 18-year-old whose opening was about dime size. I saw a pregnant woman pregnant with a pencil-sized opening. One couldn’t help but wonder how she’d managed to even get pregnant.”

A graduate of Harvard, Dr. Nawal Nour practices medicine in the Department of Obstetrics and Gynecology at Brigham and Women’s Hospital in Boston, Massachusetts; and she researches health-and-policy issues regarding female genital cutting. She explains, “Female circumcision is nothing like male circumcision. In the latter, the foreskin is removed from the penis. With female circumcision, we have the equivalent of the penis being removed.”

She was compelled to start a clinic designed to assist those who suffer as a result of the practice and to educate other health professionals about the medical impacts from the ritual.

“The major complications are seen on women who have undergone Type 3 circumcision. Type 1 removes the clitoris — this is common in Ethiopia. Type 2 excises the clitoris and the inner vaginal lips, which may end up fusing together. Type 3 is removing the clitoris, the inner lips, the outer lips, then sewing everything together, leaving only a very small opening for urination and menses. This is mainly done among Somalis and Sudanese and in parts of West Africa.”

Dr. Noor grew up in the Sudan, Egypt and Great Britain, and became aware of FGC at school. Her father, a Sudanese-agronomy professor, and her mother, an American, were influential in speaking out against it.

“I remember one girl saying she’d been circumcised and that it hurt, but it was a good thing because now she was a woman. The practice troubled me, but I was also intrigued by it because it’s so horrible — and yet, it continues. As a child, I couldn’t understand why people would do something that wasn’t good for them. I became a physician so that I could find an effective way to attack it.”

Her medical practice started attracting patients from the Sudan, Ethiopia, Somalia and West Africa. “I became known in the immigrant community around Boston as that ‘African-woman doctor’ at Brigham and Women’s Hospital.” Most of the women who sought her out had undergone FGC.

“The women who’ve undergone Type 3 can have scarring problems and problems with their menses. Some of them have terrible trouble having sex with their husbands.If the clitoris has been removed, it cannot be returned. But sometimes, when we do a procedure which opens up the scar tissue from the Type 3 circumcision the end result can look very good. It can look like new external lips have been formed. The women I’ve operated on are very pleased with that. They have less pain in intercourse and with their menses. It allows them to urinate quite easily, which often wasn’t the case before.”

Educating American health care providers about the practice to assure better care is one major goal for Dr. Nour. Educating immigrant women to prevent the practice from being perpetuated in the U.S. is another.

Some historians suggest the practice was used in 19th-century America. Castrating and clitorectomizing women was seen as a means of social control and even as treatment for ”hysteria” and ”eroticism.”

“Female circumcision is a horrible act, and I empathize with the horror of doctors encountering it, but I ask that a physician not reveal emotions and thoughts to the patient. FGC is different from the patient! The patient may or may not have wanted it herself, or she may be happy with the way her body looks. In any case, she should get sensitive and productive care.”

Dr. Nour, a board certified Obstetrician/Gynecologist, is the Director of the Ambulatory Obstetrics Practice at the Harvard-affiliated Brigham and Women’s Hospital in Boston, Massachusetts. In addition, she is an Associate Professor at Harvard Medical School. Dr. Nour is a MacArthur Foundation Fellow for creating a center that focuses upon the physical-and- emotional needs of women who have undergone FGC.

AAUW-Dearborn applauds the Arab-American National Museum for educating people about this issue.